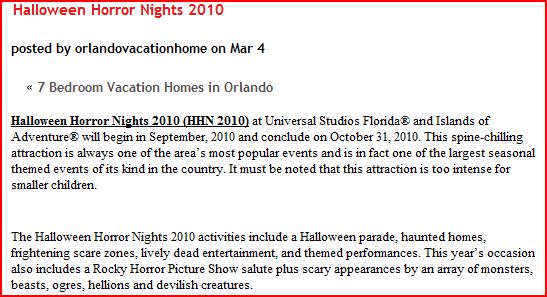 **UPDATE*** – I'm really unsure what IOA has to do with this
Well it looks like Anon has a lot of resources. I was given a link for http://www.orlando-vacationhomerental.com/ that contained HHN 2010 information. So far this information adds up to the info I've been given. It appears that HHN will be open from the end of September and the entire month of October yet it's still quite unclear… I knew I had a rumor for it being open more nights but this is way more than I expected.It also adds some proof to the parade rumor and confirms the return of RHPS.Given that all of this information is true. Could be a stretch.
The "Creatures" rumor has been debunked.  The case had become unfrozen for the permitting department to scan the document. I can only hope that these scans become public. Though it doesn't mean anything for us, it does give us hope for digital blueprints being released.
Source link:  Here
Thanks goes out to Anon!