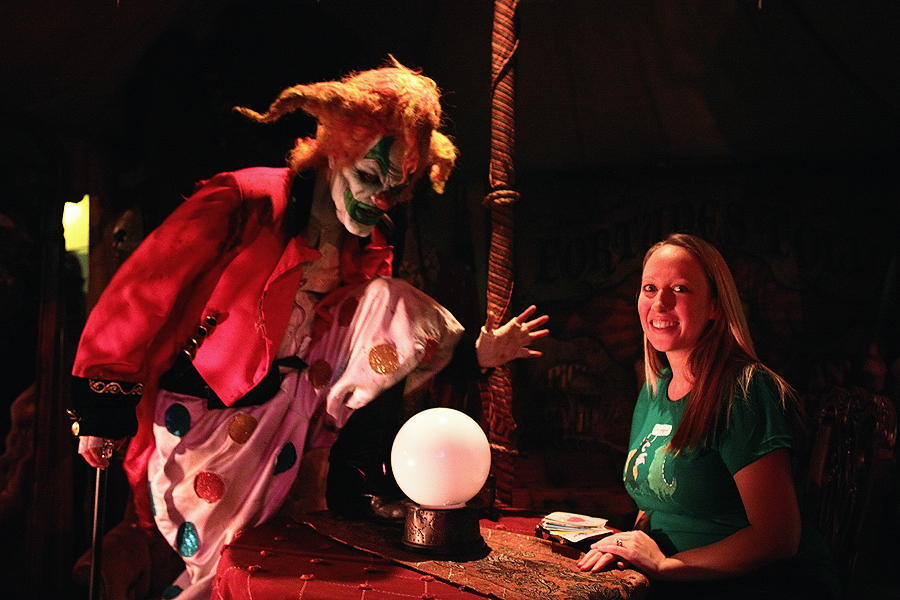 Some may or may not know my wife, but she is just as big of a HHN fan as I am. In years past, she has written reviews of the event, just never had a good place to post them. That has obviously changed, I give you Kelly's HHNXX Review:

Horror Nights: The Hallow'd Past


So far this is my favorite house. I'm
fairly new to HHN, 18 was my first year, so I obviously don't get as
much out of this house as many of you will, but I definitely
appreciate the fine details and the history. I was a little
disappointed that there were no scares in the first room, but knowing
that, I can now really look around at the displays in this area.
Also, this house is much longer than most, so you definitely still
get the scares. Even on my third time through I was amazed as I
turned through room after room, expecting to see and exit around the
next corner, but finding yet another room.


I have to admit, I was not impressed on
my first run through this house. Bored, even. I just kept thinking,
“what the heck are these bird-things, and why are they supposed to
be scary?”. I felt a vague sense of familiarity, and Chad nailed it
on the head when he said Spy vs Spy. After learning that those
“bird-things” are actually doctors, and the “beak” of the
mask would be filled with flowers to hide the stench of rotting flesh
(which you will get to experience). I didn't notice the few
“infected” scareactors until my second time through. The house
could be greatly improved by playing up the sick and dying and
decreasing the amount of doctors, or even by adding some gruesome
doctor/patient scenes. Medical technology was pretty gruesome back
then.


This is the house that I would have
wanted to be cast in. I would love to have an excuse to shave my
head! This house is high energy and intense. I was a little
disappointed that they didn't seem to change the floor plan much from
last year's Spawning house. I felt as if I could walk through
blindfolded and not miss a turn. But the layout is where the
similarities end. The house is really pretty great, and it makes my
short list.


My spell-check dislikes the way the
name of this house is spelled as much as I do. But thats really the
only complaint I can make. I don't know the whole Cindy back story,
but this house is definitely in my top 3. This is a great house for
the often troubled Jaws queue. From the minute you enter you really
feel like you're in a burning building. The air is noticeably warmer
inside, and the fog hangs in the air like smoke, rather than staying
low to the ground as it does in other areas of the park. The walls
are perfectly charred, and there are burnt wall and ceiling beams
falling down all around. My favorite room (aside from the hallway
with the open flame) is the nursery. I'm definitely getting some good
ideas for the baby's room…


This house is zombies done right. There
are about a million ways Uni could have screwed up this concept, but
it came out perfectly. And giving Scott (Howard in scene 1) a
speaking role was pure genius! Overall, a great house, not much more
to say. Oh, and I love that you leave the house and walk right into
the Zombie Gras scare zone, a nice touch which hopefully Uni will
incorporate in years to come.


Again, I haven't really followed the
whole LT thing, but I still really enjoy this house. Not to repeat my
Zombiegeddon review, but this house is a ghost house done right. It
could have been really cheesy, but its actually pretty tasteful. My
favorite part is the ghost under the floor. I don't know why, but I
get almost giddy when I watch him slide by beneath me. I also love
then the seemingly opaque wall goes translucent as another ghost
flies by. I still haven't figured out the obsession with “bed
girl”, but apparently everyone loves her. Really looking forward to
the changes to come in this house.


I'm particularly drawn to this house,
partly because of my background in psychology, and partly because I
should probably be institutionalized myself (just ask Chad – I'm
certifiable). This house does what it says… puts you in a forgotten
mental hospital with forgotten mental patients on the loose.

Hades: The Gates of Ruin


Ahh yes, Bill and Ted 2010. Much has
been said about this year's show, and not much has been positive. If
you haven't seen it since EP or very early in the event, I strongly
suggest you give it another chance. They have been continuing to make
changes and improvements. Granted, this should have been taken care
of long ago, but they are clearly working on it. The jokes are still
the same, as are the characters and storyline, but its a lot cleaner,
and they're still watching the audience reaction and working out the
kinks. Maybe by the final curtain call we'll have a really great B&T.
I can't help but wonder how much Roddy's absence has played a role in
the problems we've seen. Maybe?


I haven't made much mention of the
scare zones, and thats because I'm not a fan, in general. For me,
they are too cluttered and chaotic. People run around and act like
idiots, and I generally avoid them as much as possible. Its not
Universal's fault, but I could definitely live without them.

It seems like Uni got a great deal on
fog machines/smoke juice because the fog is out of control this year.
The already contemptuous scare zones are made that much more
dangerous and annoying by an overabundance of thick, blinding fog. It
takes away the scare, because you literally can't see your hand in
front of your face, let alone the scareactors. Saws N Steam is the
worst offender by far.

Fear is lame. 'Nuff said. Wish they
would have done more with him.

I do have to applaud Uni on their use
of lighting in the houses. Its taken some adjusting, but I think they
are finding a happy balance. On EP night the lights were bright. I
could see everything, which was awesome, but not necessarily scary.
Then on the first official night of the event, they went the opposite
direction and made several of the houses so dark I couldn't see a
thing. Still not scary. By this past weekend, they seemed to have
gotten it down. I could see well enough to figure out where I was
going, while there were still enough shadows for the scareactors to
duck into and pop out of. Hopefully they'll leave it alone now.

Overall, I'm very pleased with this
year's event. If you haven't been yet, you can rest assured you won't
be disappointed.