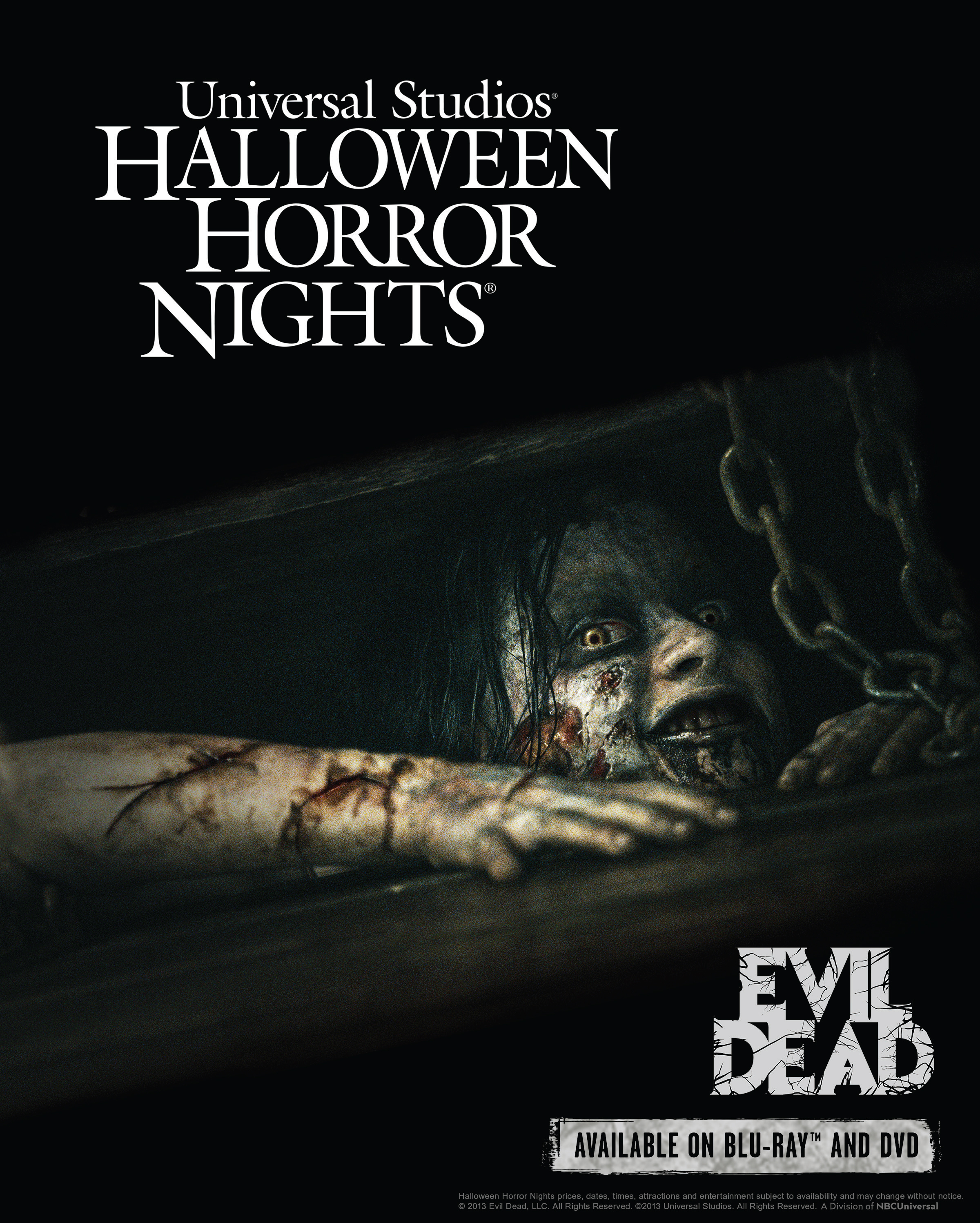 Producers Rob Tapert, Sam Raimi and Bruce Campbell– creators of the original “Evil Dead” film – reunited to present this year’s terrifying new vision of the classic horror film. The film follows five 20-something friends who turn a remote cabin in the woods into a blood-soaked chamber of horrors after awakening an ancient demon. Directed by Fede Alvarez, “Evil Dead” opened No. 1 at the U.S. Box Office, and top 10 for all-time horror remakes. The movie is available July 16 on Blu-ray and DVD with UltraViolet from Sony Pictures Home Entertainment – and now horror fans will get to live it at Halloween Horror Nights.

In haunted mazes so terrifying, they could only be found at Universal’s Halloween Horror Nights, guests will be transported into the film and face off against a demonic evil that will stop at nothing to consume them. It begins when a mysterious passage from an ancient book is read, releasing an unearthly force of darkness. A pack of violently possessed victims, including the film’s starring character “Mia,” wreaks brutal carnage throughout the mazes – and guests must make their best attempt to escape.

“I’m thrilled with how popular ‘Evil Dead’ has become with horror fans, and it’s exciting that it’s coming to life at Universal’s Halloween Horror Nights,” said Fede Alvarez, director of this year’s “Evil Dead” film. “Just like the film, this haunted maze is going to be over-the-top, in-your-face and completely outrageous – and I can’t wait to see it.”

“The Evil Dead series is iconic, and this latest film has set the scare factor to 11,” said Michael Aiello from Universal Orlando’s Entertainment team. “These haunted mazes will be just as intense and unapologetically terrifying, and I can’t wait for my fellow horror fans to venture inside and live the unyielding horror they’ve seen in the film.”

“Watching ‘Evil Dead’s unrelenting horror unfold in movie theatres was undoubtedly an unnerving experience, but with Halloween Horror Nights, we’re taking it one step further,” said John Murdy, Creative Director for Universal Studios Hollywood.  “Fans of ‘Evil Dead’ will feel like they’ve left the safety of the theatre and stepped through the screen into a living horror movie where the film’s demonic characters are coming for them.  Our incredibly immersive and highly disturbing maze experience will come to life with the same attention to detail and production value of the film and will be the ultimate thrill for horror movie fans.”

Universal’s Halloween Horror Nights has a more than 20-year history of creating an incredibly entertaining, horrifying Halloween experience that is consistently rated the nation’s best. The event features highly-themed, disturbingly-real haunted houses that are based on everything from hit films to worst nightmares — and streets filled with hundreds of specially-trained “scareactors.”