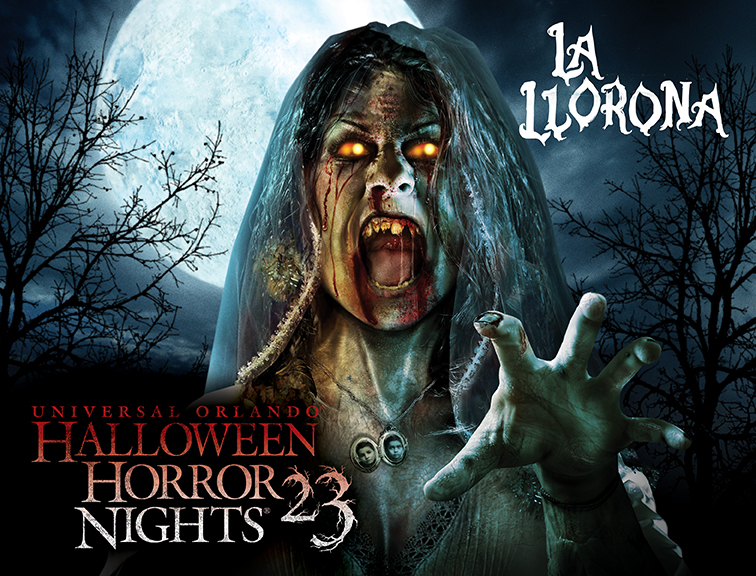 HORRIFYING MEXICAN LEGEND, LA LLORONA, COMES TO LIFE ATUNIVERSAL ORLANDO’S HALLOWEEN HORROR NIGHTS 23 Orlando, FL (August 13, 2013)
Her legend is one of tragedy…of murder.  To hear her mournful cries sends chills down your spine colder than the murky, watery depths she drowned her victims within.  Forced to eternally walk the earth, she seeks others to share her pain and suffering – now and forever…

Guests will come face to face with the 500-year old legend that has haunted millions of people in Latin America for generations, as the popular Mexican legend La Llorona comes to life as a haunted house at Universal Orlando Resort’s Halloween Horror Nights 23.

It will begin when guests enter an old Mexican chapel where they hear La Llorona’s horrifying tale of murder, tragedy and fatal love. Guests step into the funeral of her victims, and as they progress, they’ll hear her cold, ghostly whisper that announces her presence.

“La Llorona’s intriguing and tragic story has been terrifying people in Mexico and all over Latin America for centuries,” said Mike Aiello, Creative Director for Universal Orlando’s Halloween Horror Nights.  “And now at Halloween Horror Nights, you will be transported into her mysterious realm and experience firsthand this disturbing folktale.”

On select nights from Sept. 20 to Nov. 2, guests’ worst nightmares will be unleashed as evil takes root at Universal Orlando’s Halloween Horror Nights 23. This year, some of the most outrageously terrifying, highly-recognizable names in entertainment and pop culture will become startlingly real horror experiences – including AMC’s “The Walking Dead” and critically acclaimed horror films “Evil Dead” and “The Cabin in the Woods.”

Universal Orlando’s award-winning Halloween Horror Nights event is consistently named the nation’s best and transforms Universal Studios Florida into a realm of movie-quality haunted houses, incredible live shows and streets filled with hundreds of horrifying “scareactors.” More details will be revealed soon. Tickets and vacation packages are on sale now and can be purchased at Halloweenhorrornights.com/orlando.