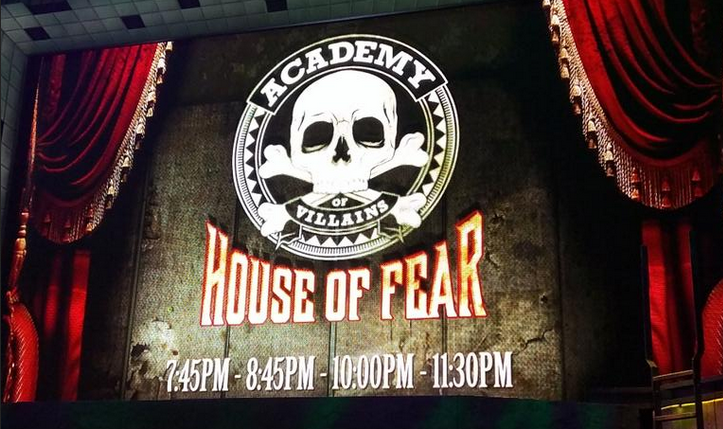 Normally, I’d be telling you about all of the funny stuff Bill and Ted’s are up to this year, but first I’ve got to tell you about Academy of Villains: House of Fear. See, I’d never seen them before and I’ve enjoyed the stage shows at HHN since 2006. This is NOTHING like those. Sorry Jack, Carnival of Carnage has nothing on this. So, you are greeted by an awesome employee just getting it to the music which is VERY LOUD and energetic.

This guy needs a raise. I also want to thank this guy for keeping us entertained while waiting for House of Fear to start. #HHN26 pic.twitter.com/dp3Y8XIiOl

Then comes the fire. Lots and lots of flame throwers at the front of the stage. Finally, it starts and the already amped atmosphere takes a shot of red bull and another of monster energy. The performers hit the stage and much like Bill and Ted’s its a dance number. The difference here is they are apparently allergic to the ground, they are jumping and doing flips over people, off of people and through people (yes, through people) and it just happened so fast and it just kept going it was amazing I can’t even form a proper sentence. Then they went into epic shadow puppet mode and told a high energy extemely choreographed fast paced story. I keep using words to describe the speedy movements and precision but I can’t explain it well enough. Have you ever watched a video at 2x speed? Welcome to Academy of Villains.

After some more flips and skateboarding and flips with skateboards and unicycles, I guess they are human and need to breathe so they did a really fun version of Bohemian Rhapsody, which you may have seen them do on America’s Got Talent, then they let it rip again!

If I try to explain how awesome this was any further I feel I might be taking away from it. Just go and see it already. This is a must watch for anyone going to the event. I was on the front row and I’m definitely going to see it again, don’t miss it!