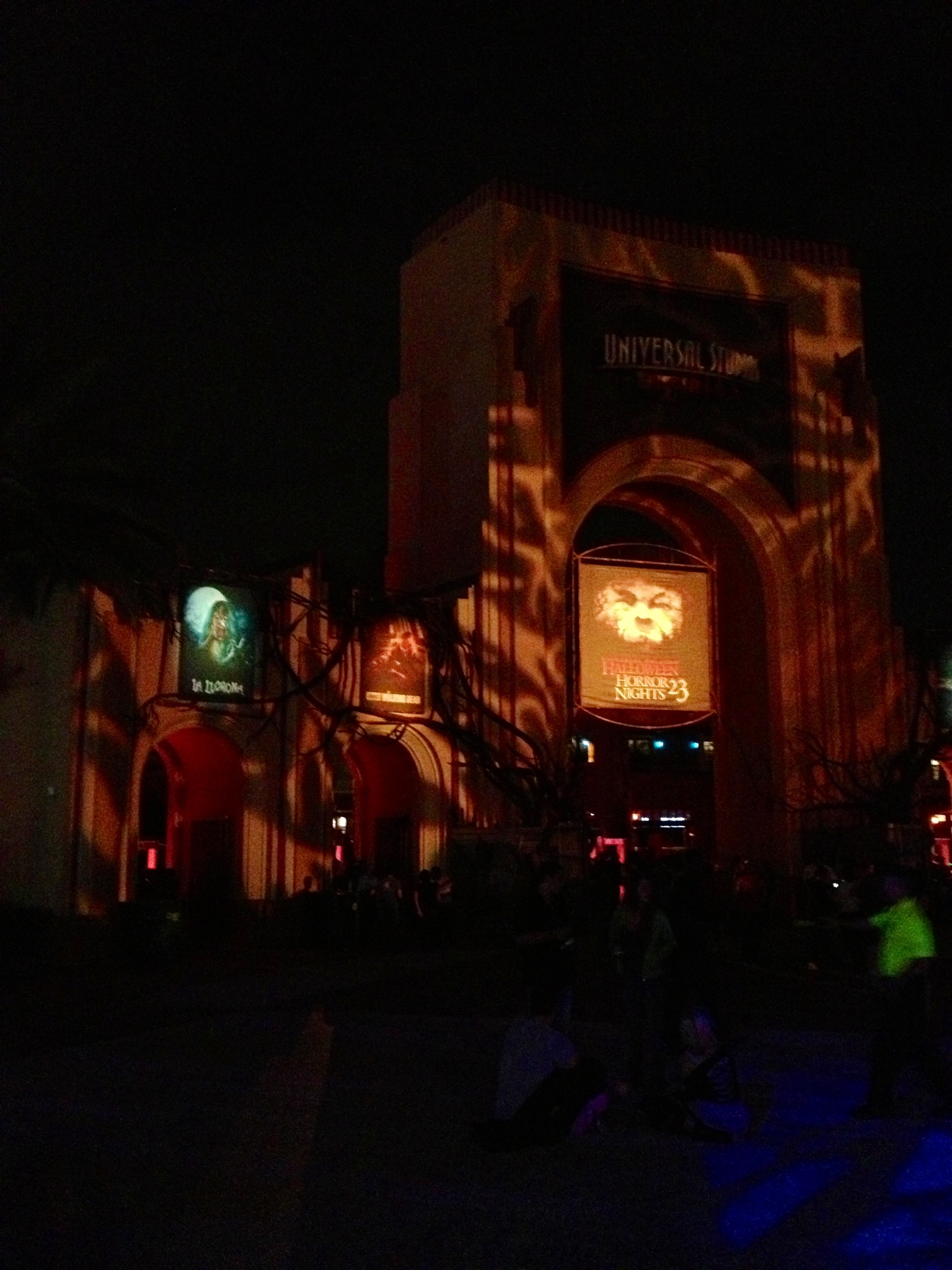 Before I start, let me preface with this disclaimer: I am a die-hard Halloween Horror Nights fan. I’ve attended 11 of the past 13 events, I collect the merchandise, and I always monitor the web (see what I did there?) for the latest HHN Rumors.

With that said, I am not a Horror Movie fan.

What? Crazy, I know.

Despite being hardcore when it comes to Horror Night houses, I’m a complete chicken when it comes to scary movies. So when you have an event like HHN 23 that is extremely IP heavy, it leaves chickens like me at a big disadvantage regarding backstory and the general knowledge necessary to really enjoy the event.

So with that out of the way, I present to you my review of Preview Night at HHN23!

My friends and I are old HHN pros, so we wandered in fashionably late around 8:30 p.m. We headed straight back to the tent houses, which forced us through our first two scarezones of the evening in Hollywood and Central Park.

Not sure if we hit Hollywood at a strange cast change time, but the streets were practically empty and we only spotted a handful of Walkers. The Walkers were either trap victims or slowly creeping by, without adding much more than ambiance to the area. As we neared Central Park, the newly-constructed Barn drew us in with a huge cloud of smoke and fog. I loved this element – scareactors were actually stationed within the barn, allowing you to walk through and forcing you to take a certain path to enter the rest of the zone. I missed the scarezone sets last year, so this was a nice taste of how HHN used to be! Central Park had a much higher population of Walkers roaming through, but again – they were slow-moving, and I only witnessed an occasional scare aided by the thickness of fog in that particular area.

Word on the street was that the Walking Dead house was closed for their fire drill, so we opted to start our night with La Llorona. The façade for this house is beautiful, and by far the most elaborate façade I’ve seen for a tent house! There’s an audio clip that plays while you wait that explains the basic storyline of the house, which I think helped. As for the house itself, I loved it. It reminded me of a mixture of 2010’s Catacombs and 2011’s Forsaken, but with some unexpected effects and LOTS of scare opportunities. The cast I saw was aggressive, and it seemed like there were constantly people after me! There were no dead spaces and no time to catch my breath! Oh, and yes – you will get splashed!

Next up was After Life. For HHN Veterans like myself, this might be a bit too much rehash for us. My boyfriend will be attending HHN for the first time on Saturday, and all I could think of while walking through the house was how fun it will be to watch him try to navigate through! The rooms are disorienting and wacky as usual, with one room in particular that will appeal to Dead Exposure fans. Overall, I enjoyed it, but it was nothing ground-breaking.

We attempted to see Bill & Ted’s 10:30 showing, but by 10:45 with no announcement from staff to let us know if/when the show would happen, we decided to bail in search of more scares. Heard from a friend later that the next show didn’t start until 11:30, so I’m glad we made the decision to leave. These kind of things happen during Preview as we all know it’s a dress rehearsal, but an announcement would have been nice!

We made our way to the front of the park, walking through San Francisco and New York along the way. San Francisco felt like déjà vu from last year, with almost an identical Walker experience there. In New York, things were a little different. This zone features “victims” as well as Walkers, which was a nice change to have actors who were able to talk/interact instead of just growling/gargling. The tank is… well, awesome. Beware – the fog in this area is definitely not your normal fog. Smelly! Definitely added to the experience.

Finally, it was time to knock out the four soundstage houses:

American Werewolf in London – Twitter was on fire about this house, so I made it my next priority. The early reviewers didn’t lie! This house is excellent. Hit a cast change in the beginning, but once the actors were in place – this house was terrifying! The puppets are stellar and NOT to be underestimated. My heart was racing as we exited the house! A+ for AWiL.

Resident Evil – I’m trying to decide how to word this as politely as possible, but… this house needs help. There were a few epic scenery rooms that were most certainly eye candy, but some of the costumes/puppets were so cheesy that my group left the house laughing. There was a dog on a stick.  An actor tried to jab me with it. I lost it after that! I’m hoping that was an unfinished prop, and I’ll give Resident Evil another shot this weekend before making any final judgments.

Cabin in the Woods – HOLY COW. I went through this house either smiling from delight or screeching in terror. They’ve chosen the creepiest of monsters to include, and the house is extremely true to the movie. The sets were perfection, and I loved every second of it. It was definitely my favorite house of the night, and I’ll be returning over and over.

Evil Dead – Here’s where the lack of IP knowledge tripped me up. I loved the scenery of the house, and there were a few really epic scenes like we’ve all come to expect in the soundstages. But… I really had no clue what was going on. There’s no queue video to help educate you, although there’s a huge screen in the first room that seems perfect for such a thing, so maybe that’s coming? From what I gathered, there’s a really angry possessed girl who really likes blood and guts. Close enough?

With a little time left, we bolted back over to Disaster to see the last remaining “original” house, Havoc. Havoc is a sequel to 2010’s House of the Year. There was a queue video explaining the storyline of the house, but due to a short line, I was only able to catch a portion of it. The scenery for the house was some of the best I’ve seen within the Disaster queue – original and innovative for that space. The Dogs of War are MASSIVE this year, so although I didn’t find the house particular scary – I think this house has potential as the actors learn and become more comfortable in their spaces.

Overall, I think the event certainly has potential. There were some stellar houses, and others with potential to become better with time. I’m not sure what can be done with the streets, but personal preference is a big factor here. Zombies don’t scare me, but I know droves of the general public will love seeing the Walkers. I don’t think this year will end up as one of my favorites ever, but I’m excited to see how it improves as the event continues. As always, A&D has done a great job creating an event with top-notch immersive houses and fantastic scares.