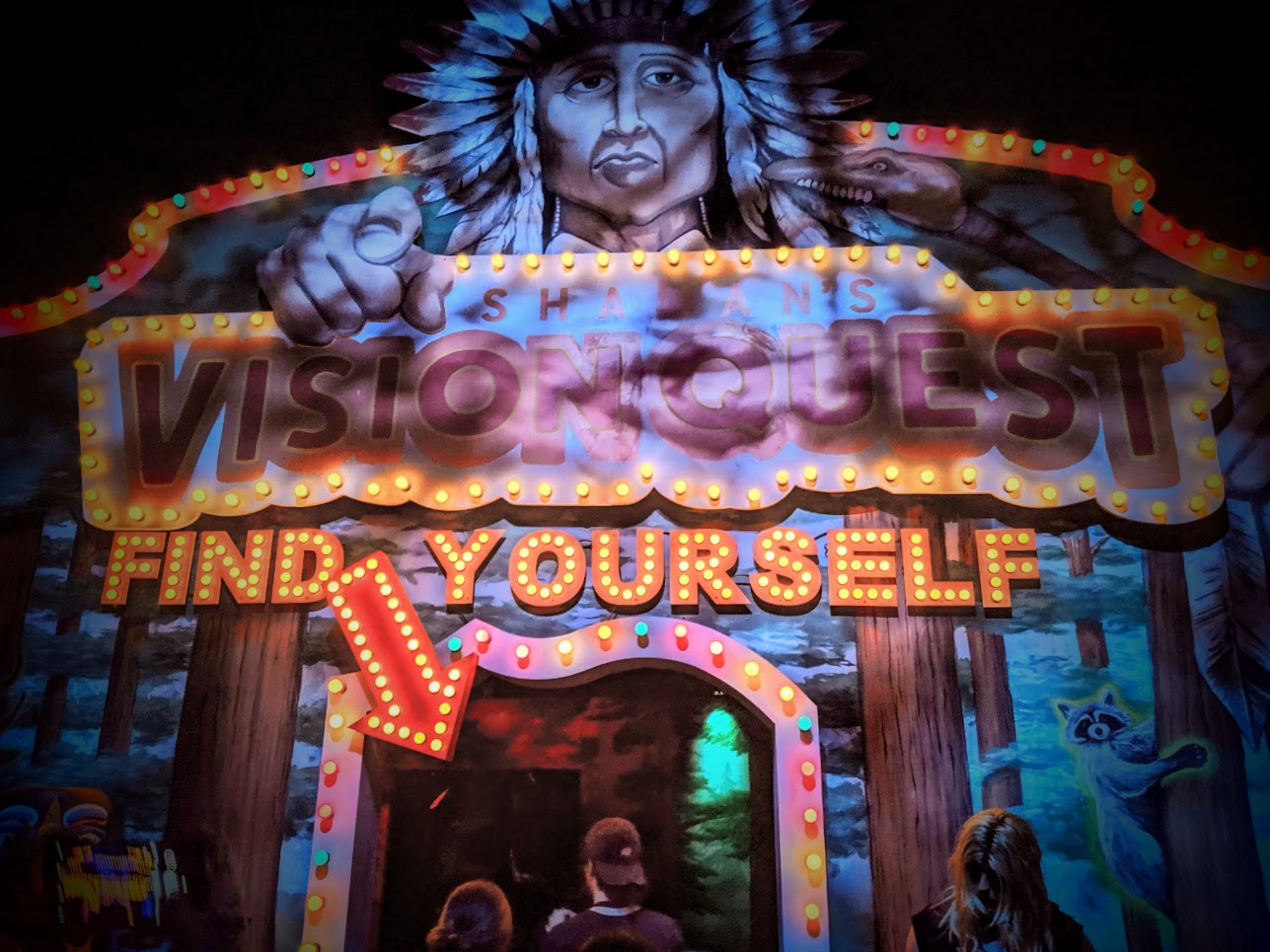 After a full weekend at Halloween Horror Nights (2019) 29, I can finally give you a bit of a run down for the houses. Normal disclaimers here: it’s the first weekend and to those that are critical, I’m not ranking the houses. As Universal’s Art & Design team will tell you, you can’t pick a favorite child, it just doesn’t work. I’ve been through each of the houses at least two times and some houses 3 or more. Overall, this year’s event is much more detailed despite having even less time to work on the event due to the event starting much earlier. I even tweeted about how this year’s event “checks all the boxes” and is a must do. Those who frequent the event will be the first to tell you that it gets better over time. My personal opinion of this year is that this is the best I’ve ever seen and it’s only opening weekend. Congrats to all involved, it’s safe to say Halloween Horror Nights 29 is a hit. 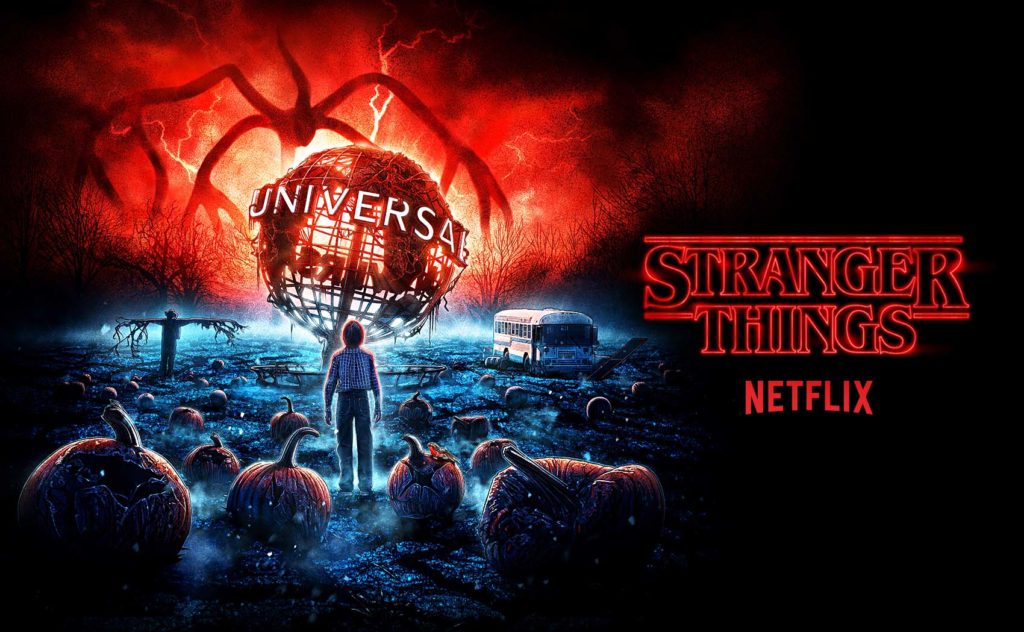 A sequel house that doesn’t suck! Ok, that might be harsh on the other sequels, but this mega house is jam packed. I was blown away when I entered the house and was in the middle of the palace arcade, complete with the most elaborate title sequence I’ve ever seen at Halloween Horror Nights. The wow factor was amazing.  You’ll see your favorite characters as you wander Hawkins and the upside down, you’ll join the crew as you close the portal, you come face to face with the giant Mind-Flayer at the Starcourt Mall. Scene for scene, it touches everything from Seasons 2 and 3. It’s a really big house with what I unofficially counted as 14 scenes. So you get an idea, most houses have 9-11 scenes with some transitional hallways.  To finish the house, you’ll join in singing the NeverEnding Story theme song! Even if you don’t sing-a-long, you’ll get it stuck in your head as you exit. Nice touch. 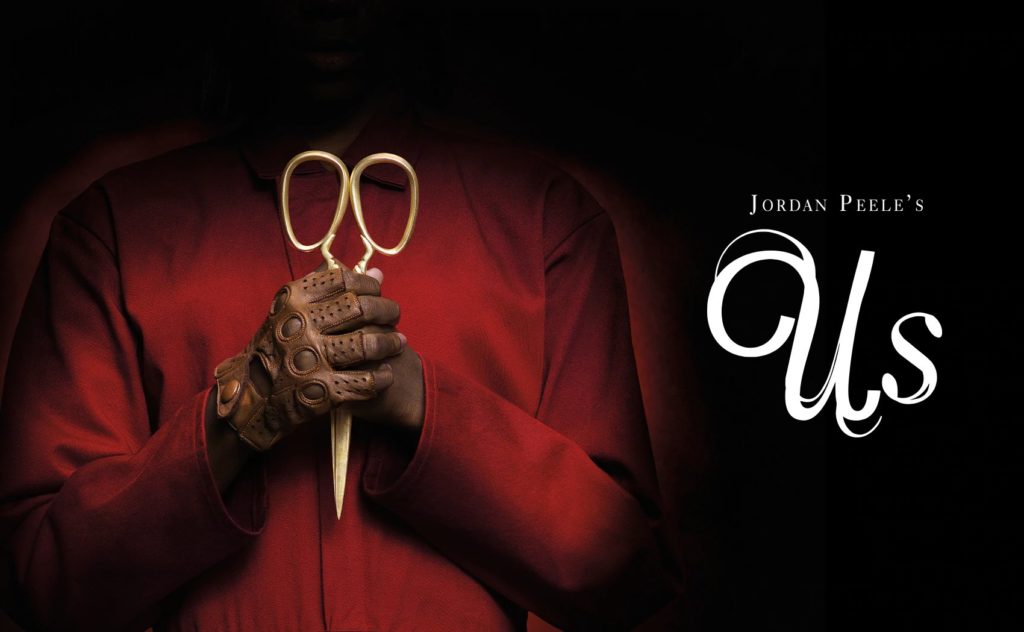 This house (takes deep breath) ok, I’m not rating houses here, I stated that at the beginning in my disclaimer. Bleh, I’m calling it. This is the best movie house I’ve ever been through at Halloween Horror Nights. Not just 2019, but since I started attending the event many, many, moons ago. If you’ve heard anything negative about this house, please ask them if they seen the movie. The art & design team had quite the undertaking with this house. When it was announced, I was struggling to figure out how they’d pull it off. They’d need to incorporate two simultaneous worlds, twins, rabbits, large sets, and lots of look-a-likes throughout the length of the maze. This house managed the impossible. That said, you absolutely need to watch the movie before you experience this haunted house. It won’t make any sense otherwise.

Universal’s long history with monsters is exactly that, long and history. Rather than the dull and cliche Halloween monsters you see on TV, Universal returned these played-out monsters to their prime. Each monster getting their own scenes to terrorize guests and remind them where it all started.  You get up close and personal with all of the classics. There are plenty of dad/bad jokes about the invisible man being in every scene, but don’t let that take away from how awesome this house is. My favorite decor is the underwater scene from Creature from the Black Lagoon. If you look up, you’ll see the bottom of a boat! 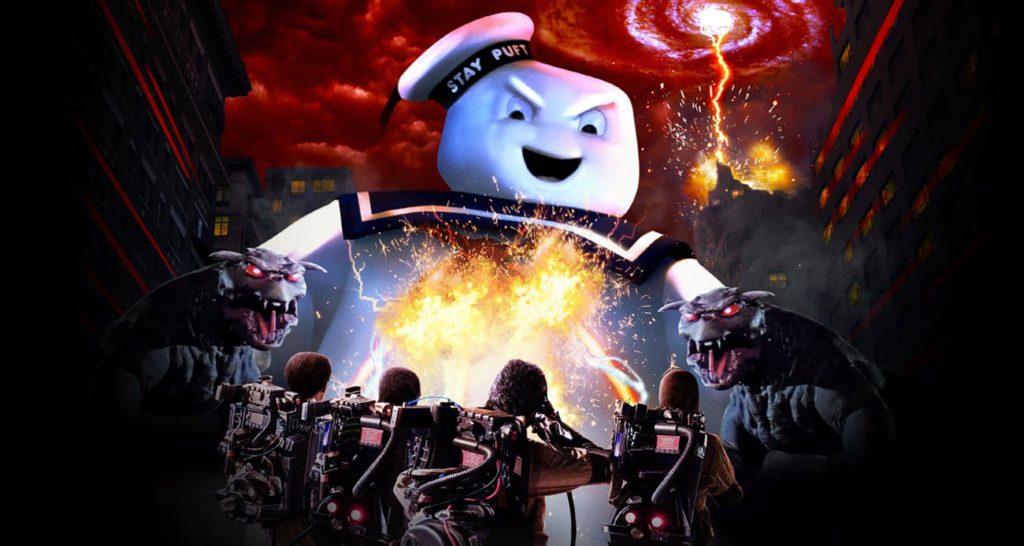 Who ya gonna call? An interesting idea for a haunted house! I’m kind of torn on this house. It’s amazing, but it’s not a haunted house. It’s a great movie experience and I’ve got nothing but great things to say about this house. Yes, there are scares, but more so the jump/startle variety. You will see ghosts and it’s beautiful. The set pieces are perfect and the scareactors and actors really sell this one. To me, the Ghostbusters house is a shift to see if in-park experiences could be a thing in the future compared to the standard haunted houses we’ve grown to love, and if I could vote for this, I absolutely would. I could especially see something like this operating during the day. In any case, you join your favorite Ghostbusters and defeat the giant Stay-Puft marshmallow man! Lots of cool technology in this house. 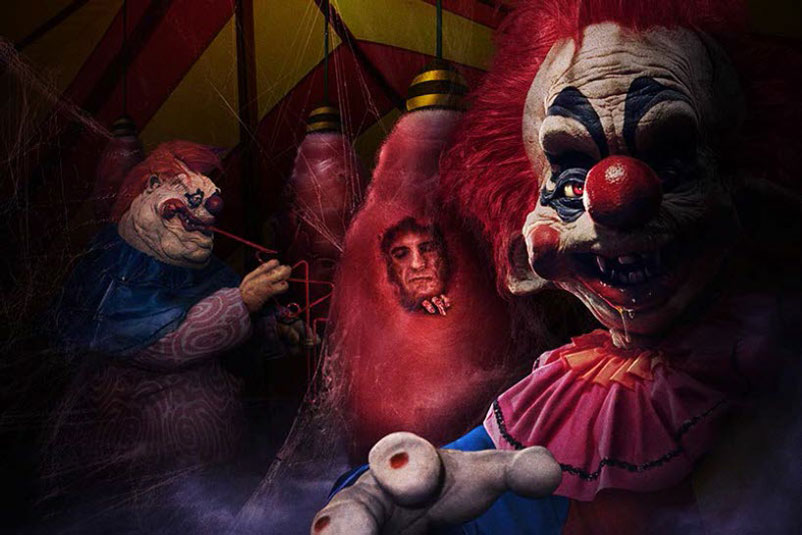 This is a circus of a house and I’m not even wrong. The Klowns are back and they are everywhere in this house. You get to see all of your favorite clowns, including the giant clown-zilla! There are so many smells in this house that really set the mood. You start with popcorn and work your way to cotton-candy. Only problem is, that isn’t cotton candy… Great comic-relief house or extremely terrifying house if you are afraid of clowns. To each their own. 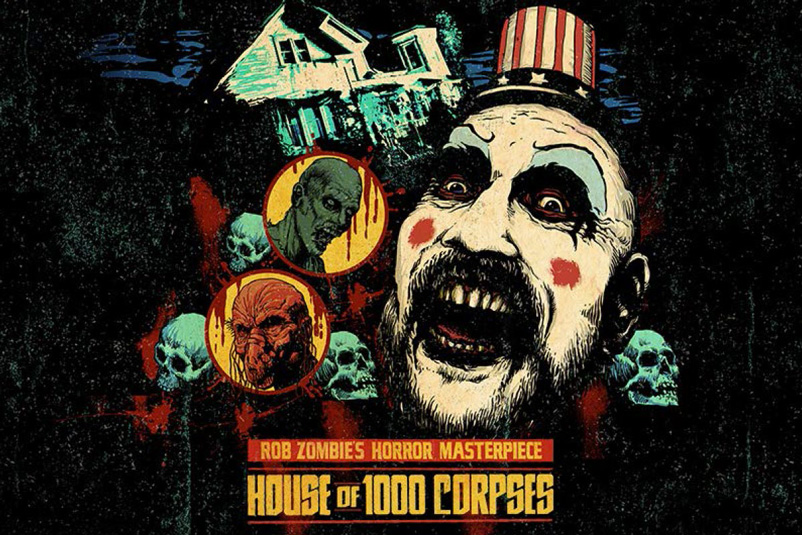 Rob Zombie’s directorial debut with House of 1000 Corpses was a hit, and in my opinion, the house did it better.  You start by entering Captain Spaulding’s Museum of Monsters and Madmen and it gets dark, very quickly. You’ll see the infamous murder ride and the “legend” of Dr. Satan. Plenty of chicken to go around.

Nothing better sums up Depths of Fear than “Classic Horror Nights.” It’s an original story line that loosely makes sense. The mouthbrooders have taken over the deep-sea mining rig and are trying to fill you with their eggs? Let’s just say the house includes very interesting costumes. For those familiar with older horror nights events, say pre 2009, you’ll know what I’m talking about here. The costumes are much like that of the “Creatures” house of 2008 where they pretty much consume the scareactor and are just barely past the line of what is passable and believable. For those who are fans of the Horror Nights of yesteryear, this is tops. 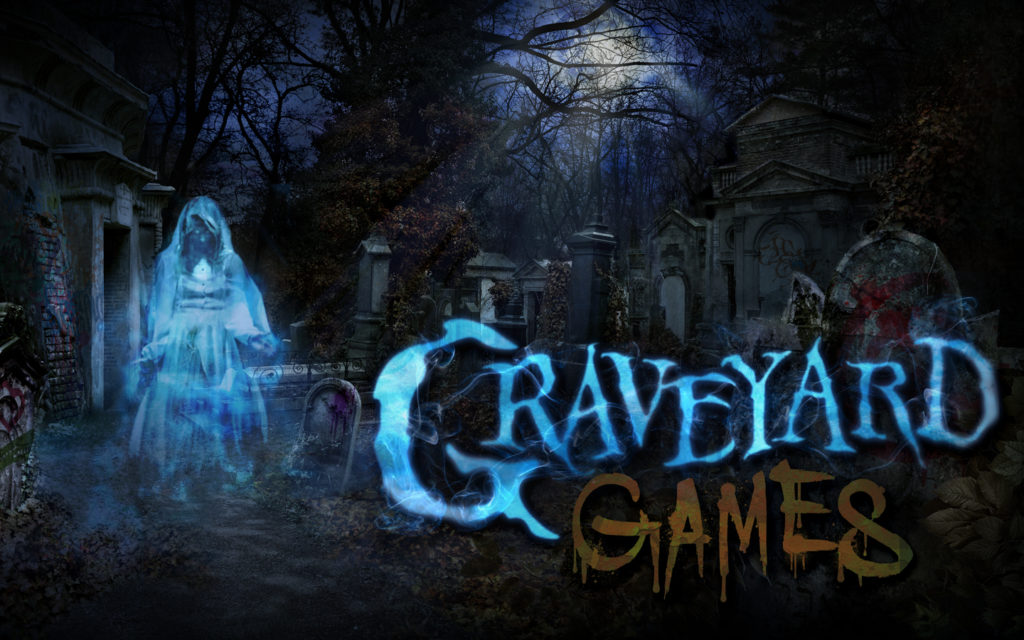 I want to give this the effects house of the year award. I know that’s not a thing, but it’s earned it! Graveyard Games is what happens when the art & design team wants to try a bunch of new “gimmicks” and no one tells them no. Thankfully, everything about this house just works. I was a big fan of the low-lying fog throughout the graveyard, it really sets the mood. Good amount of scares in the house. Then there is the dark hallway. You aren’t ready for the dark hallway.

The Nightingales are back! They have a bit different of a look to them this go around. Some have even said they look like chickens, they aren’t totally wrong there. Once you get past the interesting costumes, you’ll enter the goriest house of the year. If you want to smell the blood, dirt and death, this is your house. It’s intense and not for the faint of heart.

Yeti: Terror of the Yukon 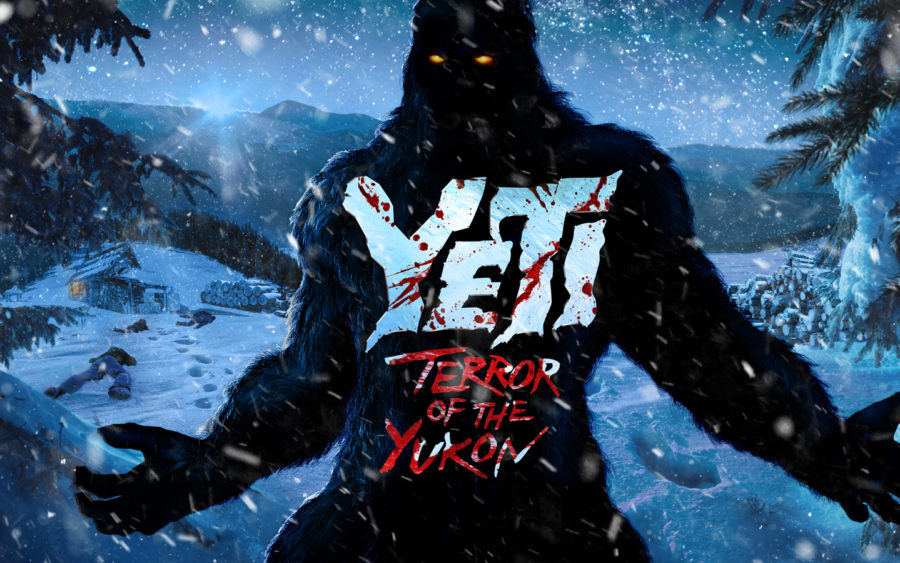 Yeti’s are real! I’ve seen them and they are massive beings. I enjoyed this house for many reasons. I was a big fan of the “Swamp Yeti” scene from last year’s Slaughter Sinema house, and I’m told because we all enjoyed the swamp/disco Yeti, it was a big reason as to why we have a Yeti house this year. I’m also a sucker for nearly any house that is set in a cold environment. Snow, even the fake stuff, feels amazing after being in the FL elements! Pair that with Yeti’s that are no joke, 6 foot 5+ and I’m in. It’s a good house, it’s more of what you’d expect to see at Horror Nights. I give the house bonus points for it’s a subtle jab at the mouse. Yes, these Yeti’s move.

Halloween Horror Nights runs select nights September 6 through November 2. Tickets are on sale now. In its 29th year, HHN brings 10 all-new haunted houses and 5 new scare zones plus the live entertainment of Academy of Villains and an all-new lagoon show. For more information be sure to visit https://orlando.halloweenhorrornights.com

If you aren’t already, be sure to follow us on twitter @hhnrumors to keep up with all of the latest HHN news!