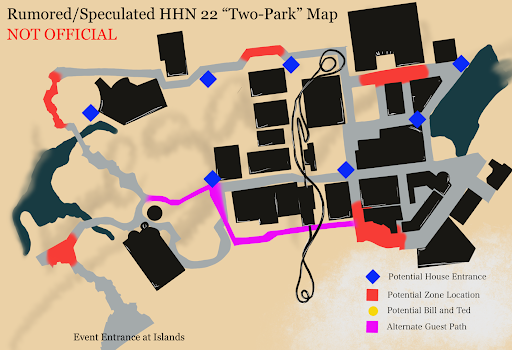 Rumor Was revisits rumors from Halloween Horror Nights’ past as told by insider Legacy. The following has not been verified or approved by Universal Studios or any mentioned entities. It consolidates information told to Legacy by anonymous sources and his observations of the HHN fan community.

First off, a personal note – the following is based on information provided to me by a secondary source: an individual with no direct connection to Universal, but who has a history of accurate rumors. They provided me the basic layout of the rumored event, plus a couple of house locations. The gaps are filled by my own speculation from additional rumors from that year.

My history is inextricably linked to Halloween Horror Nights at Islands of Adventure. HHN 12 (2002) took place in IoA for the very first time, and it was my first time experiencing HHN after obsessing over the event since I was eight. The Screamhouse green room is where I met my wife and witnessing the backstage world unlocked a deep passion. 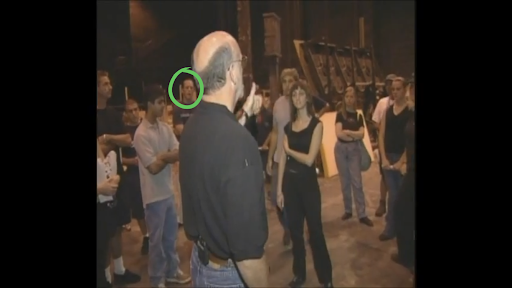 It was also my first time on national television.

Despite my personal connections to the Islands of Fear, 2002 is not my favorite year. That honor goes to one of the most famously unique years of the event: 2004 – the year of the two-park HHN.

More importantly, 2004 is the only official “two-park” year. While 2005 eventually opened up the backlot and added the Rat Race maze to the Boneyard, 2004 is the only year planned and marketed as a two-park event.

Ever since, fans have asked and wondered if… maybe this year… Universal would attempt the two-park concept again. It’s completely understandable. HHN 14 was unlike any other and, for more than 15 years, new fans have wondered what is was like to experience it (I’ll get to that). This desire becomes even stronger because there is so little media from the 2004 event. YouTube wasn’t even a thing yet – it launched the following year. 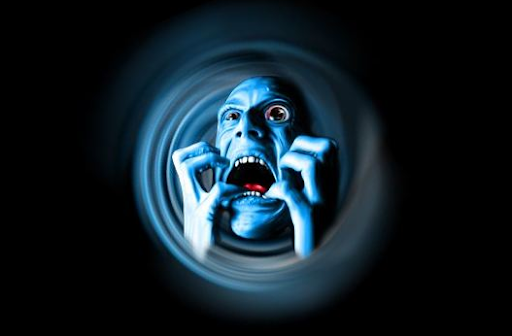 Despite 2004 being my favorite year, it was a bit of an operational nightmare. The layout had weird dead-ends, extremely narrow paths, and long stretches of absolutely nothing (not even restrooms or water fountains). If you wanted to know what your breaking point was, a half-mile walk backstage with only a single zone got you pretty close.

But, Rumor Was, we got agonizingly close to a second two-park event. This time, it would have fixed some of the operational issues while fitting into the most thematically perfect year: HHN 22.

In 2012, Universal was briefly rumored to be toying with the two-park idea again. At the time, members of Art & Design, the section within Universal Entertainment responsible for creating special events like HHN and Mardi Gras, were open about the fact they regularly considered if another two-park event was viable or necessary. Their 22nd year invited a potential link between two-parks and the “22” marketing. It’s pretty obvious. What was less obvious was how it would work. The event and its expected attendance had grown immensely over the eight years since 2004. Note – Art and Design is an older term for the section, which is now called Entertainment – Creative Development.

To understand how the layout would be improved, however, it’s important to understand exactly what was wrong about 2004. 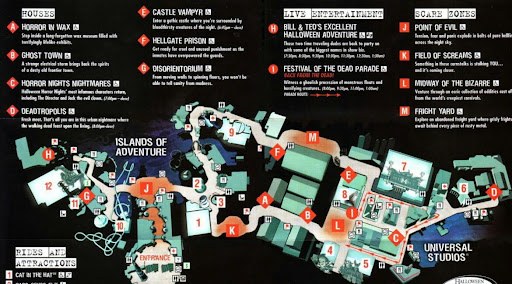 Wait, They don’t love you like I love you.

Like 2004, 2012’s proposed layout would require guests to enter from Islands (left to right), so we’re going to follow the same route.

Let’s start with one of the biggest debacles of 2004: The Bill & Ted dead end. The Pandemonium Circus theater was, easily, the best possible location for Bill & Ted and that year’s show was particularly hilarious (Dr. Evil and his running mate, Mr. Monty Burns, kidnapped George W. Bush and John Kerry to win the presidency—ah, such simpler times). However, since it was “one-way in/one-way out,” the dead end created a nightmarish traffic jam that felt like exiting a Mardi Gras concert featuring Iron Maiden. By week four, Universal opened the back half of Islands to alleviate the problem, but those portions of the park remained, basically, “dark.”

The solution for 2012 was fairly simple: Don’t use the theater. In fact, don’t use Marvel at all. By forcing all traffic right upon entering Islands, Universal could avoid the traffic jam, avoid upsetting Marvel (again), and avoid the disappointment of Hulk having to close early like it did in 2004. The event only required seven houses, so it didn’t “need” the Carnage warehouse.

Now, this does create the question of where to put Bill & Ted. We’ll get to that.

Another operational issue was the long hike along the “western” route through Lost Continent and backstage (upper path on the above map). I truly can’t describe the sheer boredom of that walk. Awful doesn’t begin to start it. This was a 10- to 15-minute hike with nothing “Horror Nights” until Port of Evil and the Fright Yard. No zone. No houses. There would occasionally be a barker by Sinbad talking about danger, but actual danger was nowhere around. The only attraction available was Poseidon’s Fury—hardly an attractive distraction.

Luckily, 2005 proved that Poseidon’s could support a house. By using the venue for a 2012 maze, Universal could help get to their seven-house count and give guests something more engaging along that path. 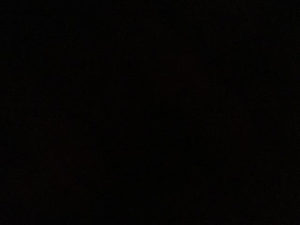 A photo from the “Terror Mines,” the one house located in Poseidon’s Fury.

The final problem with 2004 was that, frankly, the Studios side of the event felt incredibly empty. Despite having two house entrances and a parade, the entirety of it was limited to New York and Production Central. Since both houses were fairly mediocre, it felt like there was nothing to do when the parade wasn’t happening.

The solution to this problem would have made 2012 infinitely better than 2004. The event would have expanded into the Hollywood section of the park. This would have allowed a zone in New York and Hollywood, like guests expect. Most intriguing, however, would have been the new Bill & Ted venue: T2:3D.

Apart from the Carnage house location shifting to Poseidon’s Fury, house entrances from 2004 would remain largely the same. They had their seven houses and adding zones to Lost Continent, Hollywood, and New York would give guests five zones (accounting for the loss of the Boneyard) while improving guest flow.

As neat as all that sounds, it obviously didn’t happen. While we don’t know specifics, a curious glance still shows a lot of challenges a modern two-park event would face. The Hollywood Bowl and Rip Ride Rock-it, constructed in 2009, block the path between Seuss Landing that was critical to making the whole thing work. The existence of Blue Man Group made an alternate route in front of the theater untenable. There’s also a drop off point behind Cat in the Hat that uses the corn field path that didn’t exist back in 2004. Throw in the fact that a two-park event also means closing two parks to on-site guests, and keeping the event in one park makes more operational and business sense.

While we can’t confirm it one way or the other, the sudden decision to tear down the Herc/Xena building and construct Transformers in the Summer of 2012 may have been the turning point. The decision cost the event a critical house venue before Shrek became a viable option. There were rumors that the house was somehow themed to a Mayan temple (the end of the Mayan calendar was looming in 2012) or Chupacabras, and a permit from 2012 identified a scene as “Spikes.” But of course we never saw the completed house – they were midway through construction when they lost the venue to Transformers. 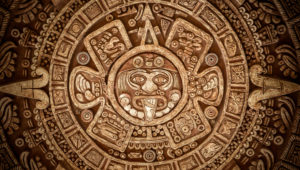 2012 was supposed to be the Mayan Apocalypse, after all.

It’s commonly speculated that the Transformers decision threw the entirety of 2012’s HHN planning into chaos. Suddenly, with a need for an additional house venue and there only being one location planned in Islands,  the entire two-park event felt unnecessary. That resulted in a shift to streets as well. The working theory is the transition forced A&D into scrapping their planned zones (including a rumored military zone in New York that would feature a parachute tower), and replacing them with the Legions—including going as far as, supposedly, using the costumes from the lost Mayan house for the Beasts legion.

Despite the theoretical feasibility of a two-park event, it’s unlikely to occur in the near further. That doesn’t necessarily mean the ideas from that year are lost forever. Some brief chatter last year seemed to indicate Seek and Destroy was inspired by the rumored New York zone from 2012. Maybe the house we lost to Transformers will resurface too. Regardless, I think the event is better as a one-park event. But we’ll always think back to what could have been in 2012 and what…