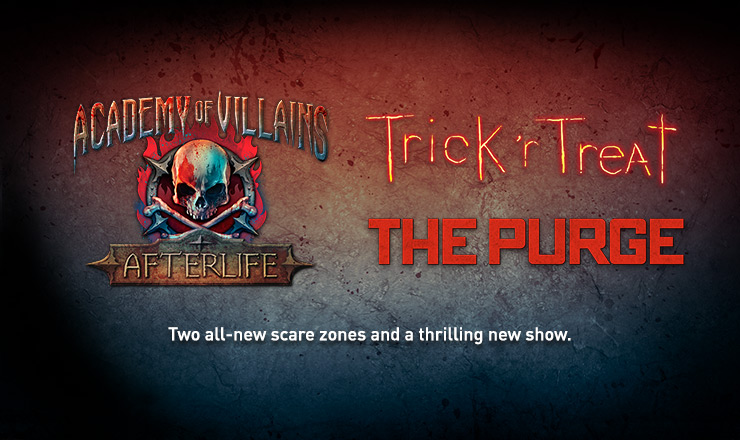 Finally something good to report on! Today Universal has announced that the high energy dance group, Academy of Villains, is back for Halloween Horror Nights 27. They also revealed the 5 scare zones that we will encounter throughout the event and it looks pretty promising.

We’ve got a good spread here too, 2 of the 5 are intellectual properties and it’s not a bad thing.

It’s back! This was by far one of my favorite scare zones of the past. Everything about “The Purge” just screams scare zone so it’s really a natural fit. We’ll get to have our favorite returning elements plus it sounds like we get to see how they clean up after Purge night.

Come face to face with Sam and other characters of Trick ‘r Treat fame. Just make sure you follow the rules and all will be fine. Construction is already underway for this zone. We’ve had some previous zones loosely based off of this property in the past. I’m just happy that the pumpkins are back in Central Park.

Altars of Horror – Avenue of the Stars

While this can be technically called an original zone, it’s more of just a mashup of all of the houses. It’s going to feature the big names from each house and put them in the streets. I like the idea of this because it will allow the guests to enjoy a photo op without breaking any rules. This is similar to how Chance had a zone at HHN26. The only thing I’m not a fan of will be the traffic jams due to all the pictures.

The Festival of the Deadliest – Hollywood

A gathering of the most unearthly, hellish terrors has emerged from the darkest corners of despair. It calls to those who long for the thrill of the scare and wish to have their fears made real. You’ll be drawn like moths to a flame, and once you join this hallowed celebration, your nightmares will never end.

Aliens have crash landed and are now roaming the streets of San Francisco. The aliens are curious about the humans that walk the area and want to learn as much as possible. They are very curious and may need you for an experiment.

These are the classics. This is what makes scare zones great. Read you park map looking for somewhere safe all you want, they will find you. The roaming hordes this year are going to be the killer clowns the media has warned you about. Oh, and chainsaws.

The fan favorite high energy dance group from last year will be returning with an all new show! Heck yes! Seriously exhausted just from thinking about last years show. You absolutely won’t want to miss this. I can’t wait to see what they have in store for us. We are told it touches on what happens when we enter the afterlife.